ELUDE
In a world where everyone is bombarding us with their messages, being elusive has great value.  How can you make what your brand has to say less accessible to those who might want it most?

NOW YOU SEE IT, NOW YOU DON’T

Free Range Brands don’t seize their prey by pounding their chests and proclaiming power. They come from behind. They’re savvy and stealth.  They know that for something to get shared or talked about, it can’t be overt, broadly known, pushed, or broadcast. Giving your audience something on the sly plants fast growing-seeds of underground interest. 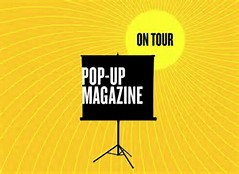 Heard of Pop-Up Magazine?  The hush-hush. limited, live story-telling event that swept through the country with barely a word last week, attracting sold-out shows of thousands in minutes?

Missed it?  Oh well!  As good elusive stuff goes, it won’t ever be documented, broadcast or available post-show on-demand. That’s right. So how interested are you now?  Go ahead, read more.

You know you want to:  POP-UP MAGAZINES

GET MORE TIPS AND TRICKS ON BRAND BUILDING: